Save the animals by shooting them!:

Your ship payment is due, but you've found the perfect job to pay off your precious (and only) spacecraft.

An outbreak on Alien Life Lab has plunged the station into chaos and there may be an epizootic crisis onboard.

*Photosensitive Epilepsy Warning: Flashing Lights and Images. Use caution if you are sensitive to these aspects.

Hit follow to get devlogs and announcements as the game evolves further!

In order to download this Sci-Fi Horror Comedy you must purchase it at or above the minimum price of $7.99 USD. You will get access to the following files:

I know this game is in early access, but it has a lot of issues... Here's a list I've compiled, you may already be aware of some of them.

Getting to the final boss room and having no idea what to do, only to check the community posts and find that there's nothing to do- The GAME should have told me that, not the website.

Objects and walls randomly don't have collision, and one room isn't even attached to the map so you can just walk outside the map in the gap between rooms.

There's no cooldown between attacks so (especially with a turboclick button) you can just spam and kill everything instantly.

Economy was completely broken, after one level I could buy hundreds of medkits and never worry about dying. Also sometimes my money would randomly display 0000000 for some reason. This combined with the last thing made me never feel in danger.

Lack of proper water controls- In the 2nd boss with water I ended up rocketing out of the water and high above the level several times.

The bosses were super janky and the 2nd one had no indication you were damaging it.

The enemy and AI pathfinding was awful, things were always running into walls and flying enemies would get stuck flying directly above me but not coming down to attack. Also flying enemies were often out of field of view so you'd appear to be randomly getting hit- Maybe adding an indication of damage direction would help.

The health bar is black with no outline so you can't really see if you're at full health or not.

You can interact with things from any distance as long as you can see them, so for example you can open lockers from across the map.

Switches seem randomly placed, one even being against a random pillar in a hallway facing the wall so you can't see it.

There is a random mechanic I accidentally discovered of going through vents. I don't think the game tells you about this and it feels kind of pointless. Also they're not consistent- If you walk through a vent and it takes you somewhere, sometimes going back through it takes you to where you entered it originally, sometimes it's somewhere else entirely.

Levels are just copypastes of the same hallways and rooms.

Coin hitboxes are weird and you often have to walk over them several times to pick them up.

Pressing E to advance text should complete the textbox instead of going to the next one, especially with how slow the text crawl is.

I really appreciate this list. I'll be sure to file these bugs and design fixes. Thanks for playing. I hope to bring a lot of new surprises and changes in the future.

Hey, nice work so far! I had fun playing through the early version. Feels like a mix of classic Doom and Alien. I dug the fog that came in on the last floor alongside the encounter.

I know this is a work-in-progress, but I just figured I'd mention a couple things I noticed.

I look forward to see where the project goes :)

I'll add these notes to my bug reports.

Yeah, I really should take a moment to polish up the control settings. I've even been told by someone that they won't play something that they can't map every input to their computer mouse. So, I should consider key mapping.

Thanks so much for playing and giving me feedback! It really means a lot.

Of course! I really enjoyed what you had so far :) I had seen you post about the game a lot on twitter, so I finally decided to pull the trigger and try it out.

Key mapping sounds like a good idea. Personally the key bindings were fine for me, but I could see someone else wanting the controls mapped differently.

This game is odd. 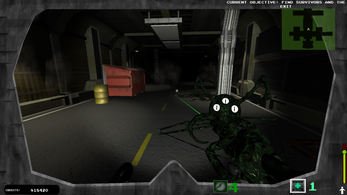 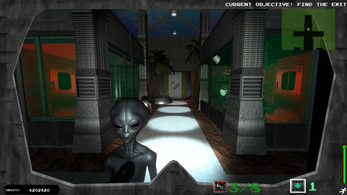